ArtCN gallery has the pleasure of presenting "Cut & Un-Cut" a dual exhibition featuring Ross Lewis and Cécile Girard in conversation through their newest works on paper. Both artists driven by their passion for Chinese Culture have studied Chinese traditional painting at different periods of time, in China and in their home country as well. When looking at their distinctive artwork, one may remember Francois Cheng and his language of Chinese painting "Empty and Full" which revealing the main structures of Chinese aesthetics. Here Ross Lewis and Cécile Girard unravel a microcosm embodying these principles while using their respective pictorial language.

Ross Lewis is an American artist and arts educator who is internationally known for creating art that engages with the Chinese literati tradition. With a deep-seated fascination for China and its culture, in his twenties Lewis began studying Chinese landscape painting, calligraphy, under the tutelage of notable artist/collector C.C. Wang in New York. Lewis’ interest in Chinese art, history, and Mandarin language, brought him to China and Taiwan, where he studied mounting at the National Palace Museum, and over the course of a decade he had the rare opportunity to visit and exchange ideas with some of the modern masters of Chinese painting, such as Lu Yanshao, Li Keran, Zhu Qizhan, and Cheng Shifa. As a result of these experiences, Lewis has come to develop a distinct visual language, which bridges key aesthetic and philosophical sensibilities of the Eastern artistic traditions to his Western context.

Transcending categorization by assimilating his training in both Western and Chinese painting, Lewis is now recognized for breaking new, universal ground in his artwork that evokes both traditions. In recent years, he has departed from the conventional use of the Chinese brush in the development of his Rope Painting Series, using instead an ink-soaked rope as his primary means of marking the paper surface. Richly textured and full of energy, Lewis’ rope paintings are a dazzling panoply of social, aesthetic and art-historical meaning. A personal diary of experiences, these paintings take on towering dimensions yet still evoke the subtle and sophisticated brushwork of literati painting. By developing these works into installation art, Lewis has been able to translate traditional literati concepts beyond the intimate personal space of ink painting, and into the public realm.

French artist Cécile Girard studied painting and art history in Paris at the Martenot School of Art, the Ecole du Louvre and the Sorbonne. In the 1990’s she came to China where she took up calligraphy at the Central Academy of Fine Arts in Beijing. At the same time she approached the artistic movement of the Naxi painters from Yunnan in Beijing and worked together with the famous Naxi painter Zhang Chunhe. After her China period, Cécile went to live in Italy and choose to immerse herself in Italian art and light, studying the making of stained glass in Venice. When she returned to France, she was careful to maintain a link with China by continuing her research and training in traditional Chinese painting and calligraphy with the painter Deanna Gao. In 2009, she eventually decided to move back to China and reconnect with the prime source of her inspiration, since then she has been living and working in Shanghai.

As the result of a trip to Anhui, Cécile set her mind on using a special local rice paper still made in the traditional. By kneading, stitching and thickening the rice paper, she gave this traditional Chinese material a new life with dense, textured and yet flexible shape. Her technique for treating the rice paper combines Chinese ink, acrylics and oil in bright and deep colors producing a rich artistic effect.

The way the space is divided up is inspired by the principle used in ornamental screens, principles converging with those of the treatment of light in stained glass art and the use of pictograms from the Naxi minority of the Dongba culture with a preference for the blue-green and orange-red as a reference to the Yunnan landscape. Cécile creates her own pictorial vocabulary, a fusion of images expressing emotions and reflections by using various elements and symbols of ancient China and Western aesthetics. 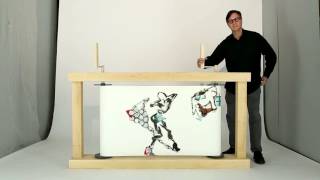 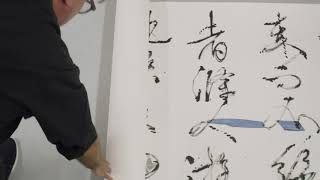 Dancing with Rope at the Armory